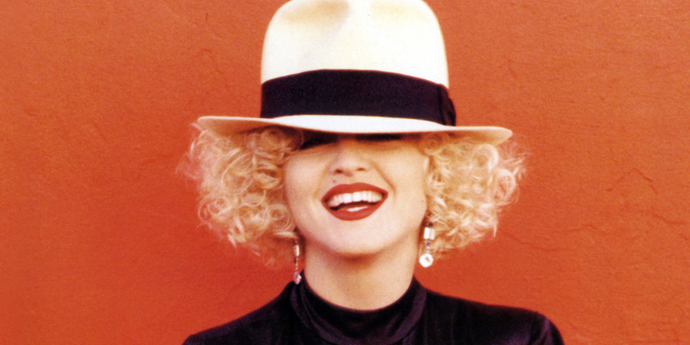 I'm Breathless: Music from and Inspired by the Film Dick Tracy is the second soundtrack album by American singer-songwriter Madonna. It was released on May 22, 1990, by Sire Records to promote and accompany the film Dick Tracy. In the film Madonna starred as Breathless Mahoney and her then-boyfriend Warren Beatty played the title role. After filming was complete, Madonna began work on the film's soundtrack, with songwriter Stephen Sondheim, producer Patrick Leonard and engineer Bill Bottrell. She also worked with producer Shep Pettibone on the album's first single, "Vogue". The album was recorded in three weeks, at Johnny Yuma Recording and Ocean Way Studios, in California.

Musically, I'm Breathless consists predominantly of jazz, swing and popsongs. The tracks reflected Madonna's showgirl personality and were influenced by her relationship with Beatty. The singer wanted to create music that would fit the style and production of the film, set in the days of the Untouchables law enforcement, and sang the songs accordingly. In some areas she pitched her vocals and belted the notes when necessary. She even smoked cigarettes in order to portray the vocals of her character Breathless. Beatty and singer Mandy Patinkin were featured as duet partners on three of the songs.

In support of both I'm Breathless and her previous album, Like a Prayer, Madonna embarked on the Blond Ambition World Tour where a section was dedicated to the songs from the album. It was critically acclaimed, winning an award at the 1990 Pollstar Concert Industry Awards. However, due to its use of Catholic imagery, Pope John Paul II called for a boycott of the show. After the tour was over, Madonna performed songs from the album at the 1990 MTV Video Music Awards and the 1991 Academy Awards. "Vogue", the first single from I'm Breathless, became one of Madonna's most successful releases, reaching number one in over 30 countries. It was also critically acclaimed and was seen as an influential song, while the video helped to bring vogueing into mainstream popularity. The second and final single, "Hanky Panky", was a top-ten hit in the United States and the United Kingdom.

The soundtrack received mixed reviews from music critics, who applauded the Sondheim numbers, along with Madonna's vocals and versatility. However, some deemed the non-film songs to be of little value. "Sooner or Later", one of the Sondheim tracks, went on to win the Academy Award for Best Original Song. I'm Breathless was commercially successful, peaking at number one on the European Top 100 Albums, as well as the national charts of Australia, Germany, and Japan—in the later it became the country's best-selling foreign album of the year. It also reached number two on the US Billboard 200 chart and was certified double platinum by the Recording Industry Association of America (RIAA). I'm Breathless has sold more than seven million copies worldwide.

In 1990, Madonna was part of the film Dick Tracy starring as Breathless Mahoney—a new role introduced for her— with Warren Beatty playing the titular character. Madonna told Premieremagazine that initially she had waited for Beatty to call her for the film. But when he did not, the singer decided to involve herself voluntarily. She pursued the part of Mahoney, but offered to work for minimum wages to avoid favoritism. Principal photography for Dick Tracy began on February 2, 1989 and ended three months later. The filmmakers considered shooting the film on-location in Chicago, Illinois, but production designer Richard Sylbert believed that Dick Tracy would work better using sound stages and backlots at Universal Studios in Universal City, California. Other filming took place at Warner Bros Studios in Burbank, California. Beatty often encouraged dozens of takes of every scene. The film was released in the United States on June 15, 1990, and was the third-highest opening weekend of 1990. Dick Tracy was the ninth-highest grossing film in the US in 1990, and number twelve globally. The film also received positive reviews from critics. Roger Ebert from the Chicago Sun-Times praised the matte paintings, art direction and prosthetic makeup design, stating: "Dick Tracy is one of the most original and visionary fantasies I've seen on a screen".

Beatty had realized several positive aspects of hiring Madonna as an actress for the film. She would be inclined to develop the soundtrack for Dick Tracy and the film studio would see this as a promotional opportunity before the release of their product, since Madonna was popular as a recording artist. This would also benefit Warner Bros. Records, who would get a reason to release a new Madonna record. According to J. Randy Taraborrelli, author of Madonna: An Intimate Biography, by the 1980s record labels started to release albums which were closely associated with a film, thereby gaining double promotion. These were mostly termed as soundtracks although many of them were not related to the film. After the shooting for Dick Tracy was over, Madonna started working on the soundtrack. She had begun recording three songs by Stephen Sondheim for the film—"Sooner or Later", "More" and "What Can You Lose"—which would be part of the album, but also had to write and develop new songs comparable in style to the previous. In her favor, she produced the entire album, including the Sondheim songs. "I want people to think of me as a musical comedy actress. That's what this album is about for me. It's a stretch. Not just pop music, but songs that have a different feel to them, a theatrical feel", she said at the time.

Madonna was in a relationship with Beatty at that time, and her whole acting, recording and singing stemmed from impressing him with the album, which was important to her. Beatty and singer Mandy Patinkin also lent their voices for songs from the album. While I'm Breathless was being completed, it still needed a lead single. At the same time, Madonna and producer Shep Pettibone decided to compose a new song called "Vogue" to be placed on the B-side of "Keep It Together", the final single from her fourth studio album, Like a Prayer (1989), to ensure that the song would fare better on the charts. When Warner executives heard the song, they decided to release it as an A-side, and was eventually included on I'm Breathless.