Madonna: Tears of a Clown 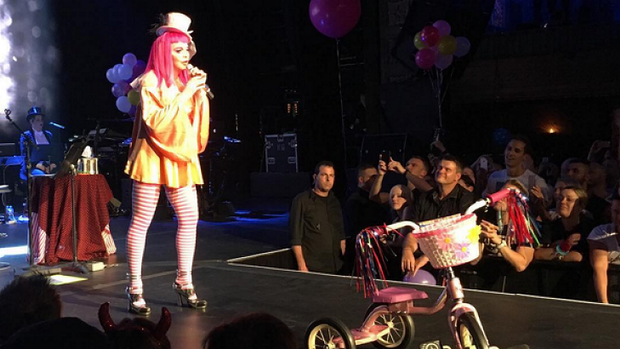 Madonna: Tears of a Clown was a one-off concert by American singer Madonna, held at the Forum Theatre in Melbourne, Australia on March 10, 2016. The singer had skipped performing in Australia during her last five concert tours, until the Rebel Heart Tour (2015–16), so she created the show for her Australian fans since they had waited so long for her to perform. Madonna explained that the idea behind the show was to combine music and storytelling and was influenced by clowns. Tickets were made available to Madonna's official fan club, Icon members and were non-transferable, with the person's name printed on them.

The show started late by four hours on March 10, due to Madonna continuing rehearsing until the last minute. Tears of a Clown consisted of Madonna singing acoustic versions of her unpopular songs while dressed as a clown. It was interspersed with the singer telling jokes and anecdotes. The show received positive reviews from critics who appreciated the stripped down, confessional nature of the singer's performance, the choice of the songs and the comedy. Madonna refuted reports of her being drunk on stage, calling them false and ageist.

Madonna had last toured in Australia in 1993 with The Girlie Show World Tour, her fourth concert tour. The country was skipped for the next five tours until the singer released her thirteenth studio album, Rebel Heart (2015). To promote the album, Madonna announced the Rebel Heart Tour, and confirmed that she would finally be coming to Australia with the concert, as well as visit New Zealand for the first time. Before arriving in Australia, Madonna announced an extra show on March 10, 2016, at Melbourne's Forum Theatre. The show was billed as an intimate gig, and was described by the singer as a fusion of music, art and comedy. It was titled as Madonna: Tears of a Clown show and was created for the singer's Australian fans, who had waited for her to perform there for the last 23 years. During her promotional appearance at The Tonight Show Starring Jimmy Fallon in April 2015, Madonna confessed that she is a "kind of closet comedian" and did a skit on the show. She added, "I always do extravaganzas, they always cost a billion dollars to make ... nobody makes any money ... and sometimes I dream about simplicity." During the show, the singer explained her decision to do Tears of a Clown:

Tickets were made available to Madonna's official fan club, Icon members, and winners with details announced at Madonna.com and through concert promoter Telstra's promotional webpage. According to newspaper reports, the tickets were non-transferable, and had the person name printed on them. However, all of them were in the general admission category at Forum Theatre, which holds a maximum capacity of 1,500. With the production design and addition of catwalk the space allocated became smaller than that. Prior to the show The Sydney Morning Herald reported that fans started queuing up in front of the venue, while Madonna rehearsed inside, as well as at Hisense Arena. Images and songs rehearsed were leaked to fan website Drownedmadonna.com, along with Madonna's manager Guy Oseary uploading pictures onInstagram. Madonna also made several references to clowns on her own Instagram account, including uploading a short video of her riding a small tricycle. The show was also confirmed to be recorded and released along with the DVD for the Rebel Heart Tour, while a live stream was shown through video streaming app Periscope.