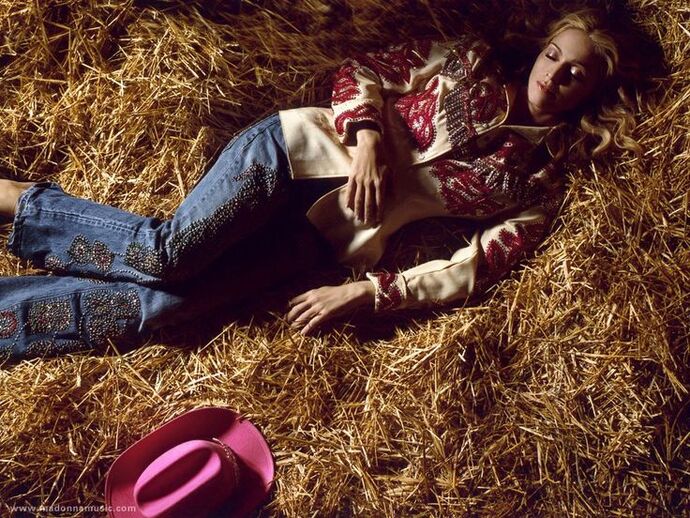 Music is the eighth studio album by American singer Madonna, released on 2000 by Maverick Records. Following the success of her previous album Ray of Light (1998), she intended to embark on a tour. However, her record company encouraged her to return to the studio and record new music before going on the road. Her collaboration with producers Mirwais Ahmadzaï and William Orbit resulted a more experimental direction for the album. Music has an overall dance-pop and electronicavibe, with influnces from rock, country and folk. The album was mostly recorded at Sarm West and East Studios in London, England. Elaborating on the country theme for the album, Madonna reinvented her image as a cowgirl.

Upon its release, the album received critical acclaim, with reviewers praising its production, as well as the album's musical creativity. It was nominated for a total of five Grammy Awards, eventually winning one. In 2003, Rolling Stone ranked the album as one of The 500 Greatest Albums of All Time. Commercially, Music debuted at number one in over 23 countries across the world and sold four million copies in its first ten days. In the United States, Music debuted at number one on the Billboard 200 with first week sales of 420,000 units, making it her first album to top the chart in more than a decade since Like a Prayer (1989). It was certified triple platinum by the Recording Industry Association of America (RIAA) for three million units shipped in the United States and has sold over 15 million copies worldwide.

The album was promoted with her concerts at Brixton Academy and Roseland Ballroom, as well as several television performances such as the 2000 MTV Europe Music Awards and the 43rd Grammy Awards. The album was supported by the Drowned World Tour, which grossed over US$75 million, making it the highest-grossing tour by a solo act of 2001 (the fourth overall). Five singles were released from the album. Its lead single, "Music", topped the record charts in 25 countries worldwide and became Madonna's 12th number-one hit on the Billboard Hot 100. It was followed with another Hot 100 top-five hit "Don't Tell Me" and "What It Feels Like for a Girl" which attained the top-ten position in several countries worldwide. "Impressive Instant" was released as promotional single, peaking at number one on the Hot Dance Club Play chart.