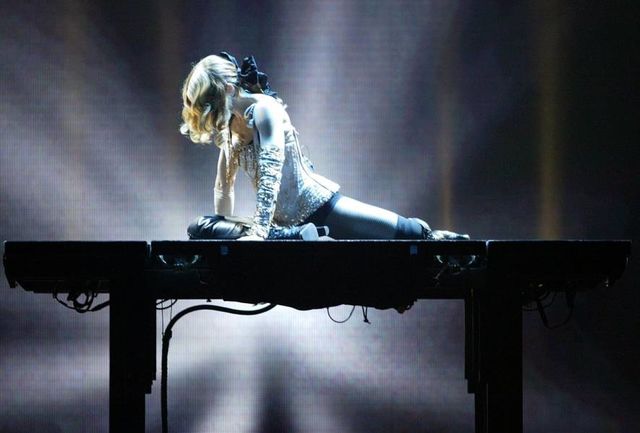 The Re-Invention World Tour was Madonna's sixth concert tour in support of her ninth studio album American Life. In 2003, Madonna collaborated with photographer Steven Klein for an art installation project called X-STaTIC Pro=CeSS. The installation portrayed Madonna in different incarnations of her spiritual practices – from yogi, prophet, queen to freak and pole dancer. The publication was a worldwide success, leading to a number of exhibitions in New York, London, Paris, Düsseldorf, Berlin and Florence. After the exhibition was over, Madonna was inspired by the images from the exhibitions and decided to incorporate them into her then unplanned tour and asked Klein to help her with the task. The poster released for the tour used one of the images from the installation project. It featured Madonna in a seventeenth century style dress, crawling on all fours towards the camera.

The main intention of the tour was to transform Madonna's old hits musically and display her capacity for transformation and self-reflection. The tour was initially known as the Whore of Babylon World Tour, although Madonna later denied using this name. The idea was to portray Madonna as the Whore of Babylon, the figure of evil as mentioned in the Book of Revelation. However it was later changed to the Re-Invention World Tour, to make it a self-confident dig at all the critics and people who have expressed their views about Madonna re-inventing her image over the years. The official tour poster displayed Madonna in a vintage bolero gown and a large French Renaissance-like hair-bun. Air-conditioning was turned off during the tour on Madonna's request as she claimed it dried up her throat during singing.

During the rehearsals of the tour, the show rehearsals would start with I'm So Stupid and Dress You Up. But they were later dropped from the show. Other songs taken out from the initial set list include Love Profusion, Swim, Live to Tell and Take a Bow. The opening song for the show was decided as Vogue for a long time, until Madonna decided to use "The Beast Within" as the opener. The finale of the show was decided to be Holiday rather than Die Another Day with Imagine being added to the setlist. Two new tracks rehearsed for the show included Devil Wouldn't Recognize You and I Love New York. I Love New York was then remade as a dance track for her tenth studio album Confessions on a Dance Floor, while Devil Wouldn't Recognize You was included in her eleventh studio album Hard Candy. Ray of Light was also rehearsed during the initial phases, but Madonna later decided to eliminate it, as performing the song at the beginning of the show would hurt her voice beforehand. Finally twenty-four of the thirty rehearsed songs ended up on being the official setlist for the show.

The costumes for the tour were created by designer Arianne Phillips. Before the show started, USA Today reported that Madonna will be making five costume changes in the tour. Phillips commented that since Madonna was revisiting her old songs for this tour, hence that was the main philosophy and inspiration behind designing the costumes. However she also noted that "Madonna has always pooh-poohed the concept of reinvention and doesn't strategize or premeditate her new look in a boardroom, so this is the greatest ironic statement of all." The T-shirts were designed by Jean-Paul Gaultierand the shoes used were provided by clothing line hosiery Miu Miu. The opening dress was created by French designer Christian Lacroix and incorporated the baroque look. The second part of the displayed military themed outfits inspired from the American Life album and designed by Phillips. The third ensemble emphasized on the emotional point of the show and hence the costumes were quieter and displayed thesilhouettes of the performers. The costumes of this segment were designed by Stella McCartney. Phase four costumes, inspired by the carnivals, were designed by Chanel. The final segment of the tour displayed traditional dresses. Other than these, Madonna wore corsets during the first segment.

Act I: French Baroque-Marie Antoinette Revival
1. The Beast Within (Video Introduction)
2. Vogue
3. Nobody Knows Me
4. Frozen

Retrieved from "https://madonna.fandom.com/wiki/Re-Invention_World_Tour?oldid=5293"
Community content is available under CC-BY-SA unless otherwise noted.