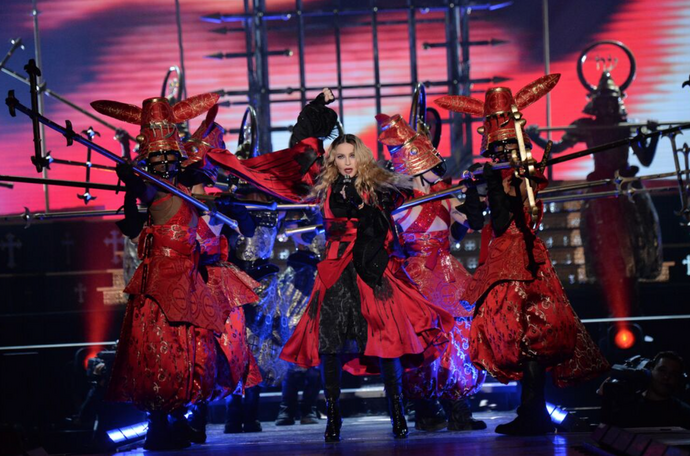 Rebel Heart Tour
The Rebel Heart Tour is the tenth tour by American-singer Madonna and it started in September 9, 2015 and it ended in March 20, 2016.

The Rebel Heart Tour is the tenth concert tour by American recording artist Madonna launched in support of her thirteenth studio album, Rebel Heart. It has begin in Montreal, Canada with two shows on September 9-10, 2015 at the Ball Centre and it ended in March 20, 2016 in Brisbane, Australia at the Brisbane Entertainment Centre.

To promote her twelfth studio album, MDNA, Madonna embarked on The MDNA Tour, which visited the Americas, Europe and the Middle East, but did not go to Australia or eastern Asia. The tour was a commercial success with a total gross was $305.2 million ($313.52 million in 2015 dollars) from 88 sold-out shows, becoming the tenth highest-grossing tour of all time. After the MDNA era, Madonna worked on her thirteenth studio album, Rebel Heart, throughout 2014. However, after hackers released demo versions of her recording sessions to the internet, Madonna responded by releasing the album for pre-order. Numerous news outlets started reporting about the supporting concert tour for Rebel Heart. Italian newspaper Torino Today reported Madonna planning on returning to Turin on November 20 and 21, 2015, with the tour. Canadian newspapers, La Presse and Le Journal de Montréal reported that Madonna's tour dates in Quebec City and Montreal had been decided. According to them, Madonna would be inaugurating a new arena in Quebec City, while the shows in Montreal would happen at the Bell Center.

The tour was formally announced on March 1, 2015 on Madonna's official website. Titled Rebel Heart Tour, it was initially scheduled to begin on August 29, 2015, from Miami and continue throughout Europe and end on December 20, 2015, in Glasgow, Scotland. According to Billboard, Rebel Heart would be an all-arena tour, and would visit cities where Madonna has not performed before. They assumed a total of 25–30 shows in North America and 20–25 shows in Europe, with additional dates being revealed later on. The tour will visit Australia and New Zealand in early 2016,and will be the singer's first visit to Australia in more than 20 years, having last toured there with The Girlie Show World Tour in 1993, and her first time in New Zealand. Philippines was added to the tour itinerary, for two performances at SM Mall of Asia in February 2016.

Rebel Heart Tour is led by Live Nation Entertainment's Global Touring Division, helmed by Arthur Fogel. It is Madonna's fifth collaboration with Live Nation, with more than $1 billion ($1.03 billion in 2015 dollars) in Boxscore grosses, and 7.8 million tickets sold for 289 shows from her previous ventures with the company. Fogel commented that the leak had helped in bring more attention to Madonna's music and it was a positive scenario for the world tour. "It's kind of strange how it all came about, but it certainly hasn't been a negative in terms of getting people engaged with the new music. Anything that helps put it out there is good, even if it happens in a weird way," he concluded.

S.E.X. (Interlude) (Contains elements of Justify My Love) (contains visual elements of the Erotica music video)
11. Living for Love (Offer Nissim Living for Drums Mix) (contains excerpts of #secretprojectrevolution)
12. La Isla Bonita
13. Dress You Up / Into the Groove / Everybody / Lucky Star
14. Who's That Girl (Acoustic)
15. Ghosttown
16. Like a Prayer
17. Rebel Heart

The large main stage was set to reach the end of each side of the arenas where they carry out the horizontally concert with a long walkway extending from the center towards the end of heart-shaped space. In the middle of the walkway there was a small circular stage where the runways are extended. In order to facilitate Madonna and her dancers appearing at any time on stage, there were openings along the entire length of the stage and paths to disappear under the structure at the end of each song. At the bottom of the main stage were three large screens showing videos made reproduced and at the same time, being divided could be displaced, along with two background vocalists singer and band on each side of the stage. Stufish, who had previously developed structures The MDNA Tour, enlisted for the realization of stage Rebel Heart Tour. Perpendicular structures emanating from the middle of the track, designed by Stufish, allowed Madonna and her dancers reach a wider audience.

One of the main features of the stage is a complex machine, like structure, which allowed the whole scenario become mobile and take many shapes and sizes throughout the show. It consists of a video screen high resolution [28 ft × 16 ft (8.5 m × 4.9 m)], which was interchangeable on the main stage as soil and creating a raised platform [8 feet (2.4 m)] or a vertical wall that can be tilted from zero to 90 degrees in less than half a minute, also used as an angular wall to show dancers swaying back and forth. Specially designed for bungee jumping, join the top edge of the machine a long spears, which allows performers perform stunts. They also were able to go under screens that act as walls.

Retrieved from "https://madonna.fandom.com/wiki/Rebel_Heart_Tour?oldid=8309"
Community content is available under CC-BY-SA unless otherwise noted.